Spain offers many amazing features for it’s natives to enjoy without spending an abundance of money all the time. In addition, features that aren’t free tend to be on the inexpensive side. This is one of the major reasons why people choose to remain or even relocate to Spain, as it’s a cost-effective place to live comfortably. In fact, Spain remains one of the most inexpensive countries in which to reside. 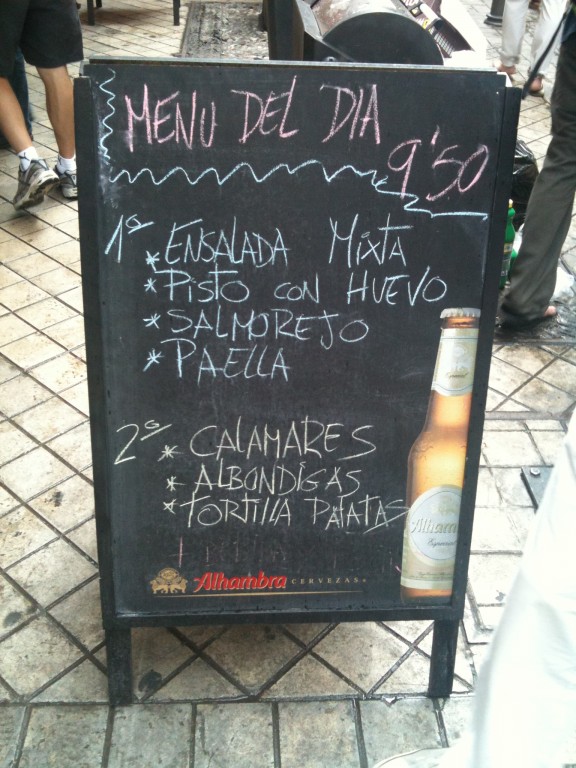 In 2015, you can find many restaurants serving the ever popular “menu del dia” for under 10€ per head in Spain

To evidence this fact, a recent survey was conducted by the UK Post Office, and Bulgaria was deemed the most inexpensive of all, but Spain chimed in second very closely behind Bulgaria, and the survey even uncovered the fact that a cup of coffee on the Costa del Sol costs just €0.90, which was priced lower than on Sunny Beach, which is a similar Bulgarian holiday spot frequented by tourists. In addition, the Costa del Sol charges approximately half of the price charged in Sorrento, Italy, and 12.7 percent less than the cost was in 2014.

Of course, prices differ from region to region in Spain. For instance, Costa Brava has higher living costs than many other seaside locations in Spain. However, at restaurants everywhere in Spain, you can expect prices to be quite inexpensive, beginning typically around €1.50 on the least costly side and on the expensive side, €2.50 to enjoy a glass of wine on a terrace with a fabulous sea view. Bars and luxury hotels tend to charge around €3 for a glass of wine, though, but when you compare these prices with those paid in Britain, they are all still very reasonable. The costs of beverages in London and even in Yorkshire often astound those who encounter them at a pub. Often, a little glass of wine can cost at minimum of £4.95.

One should understand that residing in a particular location differs from enjoying a holiday there, as utilities and other living costs should be considered. However, when one speaks with residents of the UK, they begin to come to the realisation that Spain truly is one of the most cost effective places to live in Europe. However, the only consideration to living in Spain isn’t living costs. What one should really observe is that they can enjoy life in the sun and enjoy free activities on a regular basis. With more sunny days that dreary ones, residents of Spain can enjoy much of their life outdoors at any time of the day or night alone or with friends and family! Walks along the gorgeous beaches of Spain’s coast and live entertainment in the town square under clear, blue skies, among friendly locals is all free. The slow pace of life is also an asset to living in Spain! All of these things don’t cost anything, because they are invaluable!

Making friends in Spain is easy with it’s friendly natives, who enjoy chatting and if you’re shy, can help bring you out of your shell! A little time and effort will have you making friends in no time! Learning to speak Spanish and making an attempt to reach out and chat will go a long way for you when you relocate to Spain! However, people from all around the globe choose Spain as their home, which include many English-speaking countries, even if it’s not the primary language of the land, such as France, Germany, Holland, or Japan, among other countries where English isn’t their native language.

It also may be a comfort to know that you’ll likely encounter other British expats. Learning to speak the local 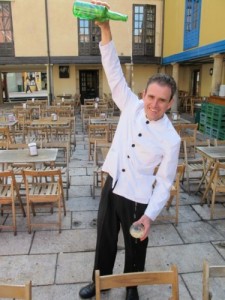 In Asturias, it is customary to pour cider holding the bottle high above your head and the glass at knee level

dialect can broaden your horizons and help you develop new and rewarding friendships and experiences in Spain. Taking Spanish classes may require a small investment, but the rewards you’ll reap will out-value hundreds of beach-side Sangrias!

Just to let you know, the Spanish don’t commonly drink Sangria, as they actually prefer wine or beer, which includes summer red wine (tinto de verano), which isn’t unlike Sangria, however it contains less alcohol. It’s created by blending red wine with a mildly sweetened soda (gaseosa) or sometimes a lemon-lime soda is used for those who desire less of a sweet beverage choice. These pleasant beverages are an inexpensive way to enjoy an alcoholic drink without going overboard when spending time on the beach or poolside.

An excellent alcohol choice, while we’re on the subject of alcohol, is Spanish cider! Asturias is regarded as the region that generates the highest quality Spanish cider. Spanish cider is easier on the stomach than British cider and has a richer apple taste, which makes it super refreshing. Even better is that this beverage type is inexpensive!